Koh Rong Samloem is a small tropical island located off the southern coast of Cambodia with the natural beauty and beaches dreams are made of. The island has warm turquoise waters lapping onto powdery white sand beaches all fringed by palm and casuarina trees that make for the perfect photo opportunity . If you’re looking for a great beach holiday to top off your trip to Cambodia then this should be first on your list. In addition to the coast the as yet undeveloped inland area is a natural rain forest supporting a diverse ecology ready to be explored and off shore the coral reefs are teeming with marine life


Koh Rong Samloem is situated eighteen kilometres due west of Sihanoukville, Cambodia’s largest mainland beach resort and is now regarded as the premier beach holiday destination in the country. This is in large part due to it being a peaceful ‘getaway’ destination which is more tranquil and also much less developed than the other beaches in ‘The Kingdom of Wonder’

Among those in the know, including the expats that live and work in Cambodia, Koh Rong Samloem is recommended as the smart choice attracting those searching for pristine white sand beaches with the convenience of less than an hour’s ferry journey to the mainland. The high quality accommodation paired with the stunning natural environment, including the bio-luminescent plankton that makes the warm waters glow and sparkle at night, had been a bit of a secret gem shared only by word of mouth. Now that news has spread and with the introduction of fast ferries from the mainland to the island, it is fast becoming a bucket list destination

The island’s clean beaches suffer substantially less of the construction noise and light pollution that has become a problem on the mainland. Those looking to party all through the night at beach bars blasting out dance music until sunrise will be disappointed. The island is geared more towards those searching for peaceful nights sipping cocktails while listening to the chirping insects and lapping waves

The highest quality accommodation on Koh Rong Samloem is set around Saracen Bay where you can choose from a number of small scale resorts typically with around fifteen bungalows and a quality on-site restaurant. I find these resorts have a high ratio of staff catering to their guests needs and give excellent service with a smile

There are also a number of medium-priced bungalow operations right on the beach for those that do not need the air conditioning or access to a swimming pool but still want that magical bay view from their balconies. In addition to Saracen Bay a new area at the eastern end of Koh Rong Samloem, known as Sandy Beach, has recently seen some high end development giving the visitor a few new interesting options to explore

Koh Rong Samloem is being actively protected by the Wonderful Wildlife of Samloem project to maintain the unspoiled natural beauty, keep the pristine beaches clean and minimize the noise and light pollution that impacts the indigenous animal population. Please check out our Island Ecosystem page and if you visit try to leave the island as you find it or maybe even better!

There’s a great choice of places to stay ranging from luxurious air-conditioned Khmer-style villas set right on the beach through to the numerous beach bungalow complexes that dot the shoreline of Saracen Bay and Mpay Bay as well as on a few other more secluded beaches. The sunset side of the island is much quieter and has a selection of budget and medium priced rooms and bungalows. For those traveling on a tighter budget try the guesthouse rooms available in Mpay Bay fishing village or visit during the wet season where great deals can be grabbed at the resorts

CHECK ALL
BUNGALOW PRICES
VIEW ALL BUNGALOWS
ON A MAP

MY TOP TIP – For the Christmas and New Year periods the best bungalows can be fully booked six or more months in advance. I receive lots of emails asking me about availability during the high season and I highly recommend booking early and book at one of the many resorts and bungalow operators that offer free of charge cancellations in case your plans change

“What the beaches of Thailand were like 20 years ago… utterly serene and beautiful.
Calm, clear water laps lazily on idyllic white sand beaches, and there’s not much else to do but kick back and enjoy the sun, sand and waves.
Word will get out — it always does. So get to these islands before they become overrun with tourists”

Now that news of the spectacular natural attractions on the island are spreading over the internet and with the growth of the high quality accommodation options right on the beach the island is seeing a large increase in visitors looking for more luxurious waterfront bungalows. This has resulted in many bungalow operations upgrading their facilities

There are comfortable bungalows suitable for honeymooners and romantic couples searching for the deserted tropical island experience as well as a growth in accommodation suitable for families with children including resorts that have 24 hour electricity, air conditioning, a swimming pool and family bungalows with multiple rooms 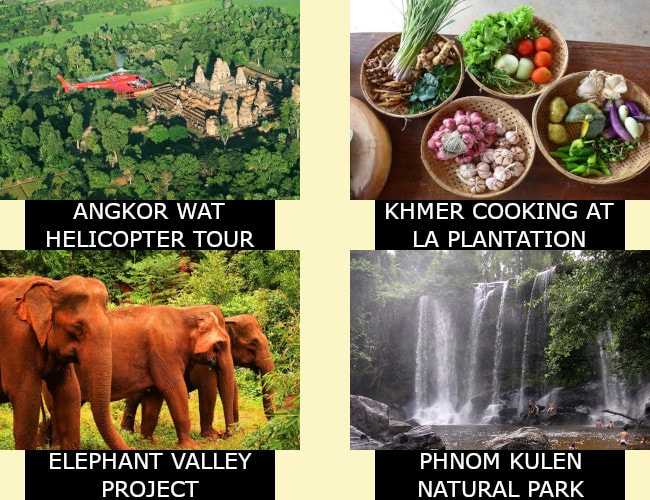 The 2019 high season consists of the period from December through to April with November and May being the shoulder seasons where good discounts can be had. Outside of these months the prices can drop substantially although they firm up in July and August during the European holiday season where demand can increase

Koh Rong Samloem is small but far from tiny measuring approximately nine kilometres long and five kilometres at its widest point although the distance from Saracen Bay on the sunrise side of the island to the sunset side of the island is little more than a pleasant if rather humid one-kilometre walk through the jungle. I can’t recommend carrying heavy luggage across the island though as that makes the walk rather more demanding as I found out myself. If exploring by foot doesn’t appeal to you then local boats can be hired for memorable trips around the island chugging slowly to visit the different beaches – just remember to fully protect yourself from the sun’s rays

The best known and most visited area, Saracen Bay is the white sand enclosed bay boasting an unspoiled three-kilometre long beach on which much of the recent high quality development has taken place and is the location of the main boat pier that links the island with the mainland. From Saracen Bay there are paths which allow visitors staying in the bay to reach the other beaches on the island and explore the island’s attractions

Mpay Bay is at the north of the island and is now served by boat services from the mainland. It has seen many of the new budget accommodation options from individual bungalows to guest house rooms being built either on or a short walk from the beach. It gets its name from the local fishing community called Village Number 23 as in the Khmer language ‘M’pai Bei’ means twenty-three

Fast boats now cover the 16 kilometres from the mainland to Koh Rong Samloem in under an hour. There are now four operators competing for customers on this route with pricing for a return ticket being around $25 per person. This price includes a $2 government tax used to maintain the natural coastal environment

Scuba diving and fishing trips are available from Koh Rong Samloem and can be arranged through the locals or the bungalow operators. Also there are great places for snorkeling around the island if you tire of lazing on the beach or swimming in the pure turquoise waters Kayaking, jungle trekking and mountain biking are just some of the organised activities that are offered although the majority of visitors are content to kick back and enjoy the beautiful beaches and amazing views

Internet and mobile telephone coverage is available at most places using a local SIM card and the data transfer tends to be quite slow along with the island’s pace of life. It is recommended to buy a Smart SIM card with a data plan for a handful of dollars before leaving for the island in order to get cheap access to the network as this seems to offer the strongest signal and have the greatest coverage although Metfone SIMs also work in some places. An increasing number of bungalow operators are supplying a high speed internet connection although it is currently only available at the more luxurious places as this is expensive for the resort owners

The Koh Rong Samloem Full Moon Parties were being held at the Good Vibz Camp which is located high up in the jungle above and well behind The Beach Island Resort on Saracen Bay although they no longer take place on the island. The parties saw an influx of people for the night from both the mainland and Koh Rong plus special Christmas and New Year parties were also held

The nearest airport to the island is Sihanoukville airport which is about a 30-minute taxi ride from the mainland pier where the boats to the islands depart from. The cost of a taxi should be around $20 for the twenty kilometre journey. There are currently international flights from Bangkok, Kula Lumpur and China arriving at the airport as well as flights from Siem Reap (Angkor Wat) and Phnom Penh, the capital of Cambodia

There are currently no banks or ATM machines on either Koh Rong Samloem or Koh Rong and credit / debit cards are not widely accepted except at larger resorts so visitors must take US dollar cash with them to pay for food, drink and activities. Business owners appreciate if you can take some small denomination notes as changing large notes can often be problematic

In the Cambodian language known as Khmer the word ‘Koh’ means island. There are two main theories behind the word ‘Rong’ with the first being that it was simply someone’s name and the other theory relates to the Cambodian word for ‘cave’. As for ‘Samloem’, while it is the most frequent spelling used, it has no meaning in Khmer whilst ‘Sanloem’ translates in English to ‘far away’ and is seen on some, but certainly not all, official Cambodian maps

The different spellings occur as converting Khmer to romanised script is subjective due to differences in the way consonants are vocalised. That said, picking up a few useful words is simple and often will produce a wide and genuine smile from the warm Cambodian people

If you book through the links to these companies on our website, we receive a small commission at no extra cost to you. Thank you in advance for your support!